Three intriguing names which all having strong links with one of the greatest cities on earth, New York!! One a legendary satirical, literary figure from New York; the next an esteemed Brooklyn Navy Commandant and the last a Native American Chief of the Canarsees who was big boss in and around Brooklyn when it was still Dutch. A strong tie with New York is a link they all have, but the biggest bond that this trio has is NY Distilling Company, three intriguing names for three intriguing gins. On a recent journey to the Big Apple I had the privilege to be taken on a private tour of this distillery based in the heart of Brooklyn. When developing the brand 6 years ago, founders Tom Potter & Allen Katz wanted to highlight and encapsulate New York in their brand, and I think they have done just that, each gin is unique in their own way, and everyone involved is so passionate about the brand.

Chris Murillo radiated love and passion for his job, it was as clear as gin (well most gins) when Chris was speaking about the liquid libation that he was extremely passionate about the spir 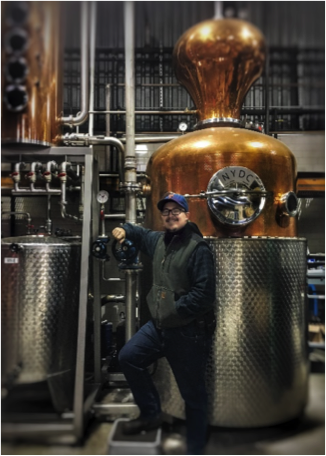 it. Somewhat of a rookie in the distilling world, his journey only began 3 years ago,previously working as a lawyer for 9 years. After a drunken New Year’s Eve in 2011 he got his eureka moment and came to the realisation that his dream and desire was to begindistilling, he seized the moment as they say and grabbed it with both hands and hasn’t looked back, and so his distilling adventure began! He studied and apprenticed for two and a half years developing his craft and recipe for his own gin “Queen’s Courage”, after these pivotal years he decided to put all his attention and energy into the product heso lovingly created, leaving his job in 2014 on Friday the 13th (not so unlucky for him) he established the first distillery in Queens since prohibition, the “Astoria Distillery Company”, going from strength to strength and building upon his skill set he bagged himself a distilling job with NY Distilling Company, not being feasible to keep the Astoria Distillery up and running he closed shop and moved production to the NY Distilling base developing his gin alongside the others. I was lucky enough to be brought on a private tour by Chris and he even let me try all the wonderful liquid creations (lucky girl I know!).

Dorothy Parker – A New York Gin taking on some of the components of an American Dry.    American gin is less juniper forward than a traditional London Dry, not relying heavily on juniper and increasing the intensity of the other botanicals. Old Dot uses elderberries, citrus, cinnamon & hibiscus and it is delicious! The hibiscus petals play a pivotal role in this gin, you can really taste a subtle sweetness, which is balanced by the spices and juniper, and there is a delicate hue of pink off the liquid itself. I wouldn’t class it as a traditional American Gin as you can still taste and smell the juniper coming through, essentially it has the aspects of traditional with contemporary features. Good for G&T’s, and number of cocktails, Dot is an all rounder!! 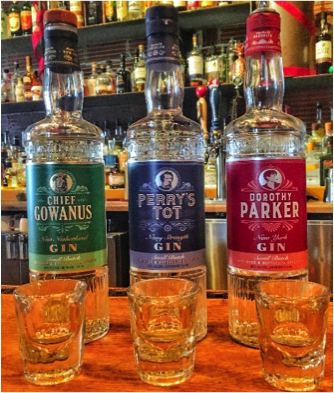 Perry’s Pot – Named after a Brooklyn Navy Commandant (Matthew Calbraith Perry), the drink is true to its word, a navy strength gin that packs a punch. When Chris took off the cork and let me catch a whiff I was instantly hit with the strong smell of juniper familiar to a London Dry. Very smooth and creamy with some herby hints, strong but not overpowering, Chris spilled the beans and outlined the interesting use of raw honey in this gin, pouring the honey straight into the still adds a lovely creaminess to the gin. It is a strong character through and through and is one that should be tried for all those man enough to take it on! I salute you Perry’s Pot!

The recommended serve for Perry’s Pot Gin is a G&T.

Chief Gowanus – Special and unique in every way (my gin nerdiness definitely could not be concealed, I was too excited to try this)!! Based on an 1809 recipe from NYC, this gin stems from Dutch settlers who wanted to develop a Holland Gin, so using ingredients readily available to them at the time they developed this unique recipe. NY Distilling Company did some research with a NY Cocktail Historian and discovered this lost piece of history. Using all NY based minerals and ingredients from 200 years ago such as juniper and cluster hops the company brought back to life this historical find, and what a treasure it is! It has a base of unaged double distilled rye whiskey, being stored in a barrel for 3-6 months. It is off the beaten path to original gin in all aspects of flavour, colour & process, it is most definitely unique and delicious. Spiciness greets you when you take that glass up to your nose, when you sip this bad boy you are met with a slight herby taste which changes to lovely spicy notes and the gin has a pale yellow haze! Very historically accurate and one of Chris’s favourite things to make, he recommend it to be served in Martinez or Martini. I bought myself a bottle of this big chief and cannot wait to get experimenting with it!

Black Tot –  A limited edition treat!! An exclusive bottling for Master of Malt and when I visited they had only shipped the barrels the previous day, I was lucky enough to try a sample of the one barrel left in the distillery. An aged version of Perry’s Tot, very dark in colour, I got the distinct explosion of liquorice in my mouth and Chris explained that star of anise is used during the process and the taste really gets extenuated during the aging. The base being a navy strength makes it a strong one; let’s just say it will put hair on your chest!! But although strong it is not overpowering, more warming and soothing, perfect for a winter’s night. Chris recommended this to be served straight topped with some ice.

Queens Courage –   This is Chris’s own pride & joy, and it is a great local product, his gin is very unique due tothe process by which he creates it. Being distilled in fractions I was yet again lucky enough (the good old luck of the Irish) to be in the distillery during this process.   These fractions are the juniper fraction (just juniper), citrus fraction (uses grapefruit & lemon, extremely fresh aroma coming from the barrel) and the OCC fraction which is Orris, Coriander & Cardamom (spicy, aromatic scent) he then blends these together. This is an Old Tom Gin (a type which I am partial too) sweet on the palate but balanced by the use of the spices, very smooth going down, Chris explained that the use of a small bit of whiskey as part of the base helps develop this creamy, smooth finish. Highly recommend if get the opportunity to try!

My adventure to NY Distilling Company was a great experience, it was small, quirky and all its products were unique, the founders, distillers and anyone who is involved with the distillery relish in New York heritage and put their blood, sweat and tears into their produce!! If you visit New York definitely make this a stop, they have an on sight bar (The Shanty) that offers a wide range of cocktails and other delights. NY Distilling Company is on my watch list I can’t wait to see what they come up with next!!

View all posts by ginphoria